Building a Rugby Legacy in the Northland

In the fall of 2008, some enthusiastic students from Liberty High School who has played for the Kansas City Titans, based out of Park Hill, decided that they wanted to start their own rugby program. The young men worked hard to recruit to build their own program and in 2009, the Liberty Rugby Club took the field for the first time. Shortly after that, Liberty North High School opened and Dr. Jacobs of LNHS wanted his students to have somewhere to play.
​
In 2011, the name was changed to Liberty United Rugby Club and a girls program also began that year, with students from both Liberty and Liberty North High Schools represented.  Liberty and Liberty remained together until the hiring of a rugby coach for Liberty North High School for the 2014-15 school year. At that time, we split both the Men's and Women's programs into their separate programs. Both programs continued to grow and the Liberty Jays Men's and Women's Rugby Clubs flourished with their student body embracing the club and recruiting to build our program.

The Jays Rugby Clubs have continued to grow and build to a team that is based in a team culture of school pride and involvement. They continue to work to grow the game and encourage others to play. The clubs look to World Rugby's Core Values of discipline, passion, integrity, solidarity and respect as the foundation of the programs and work to represent their school, community and families with those core values. 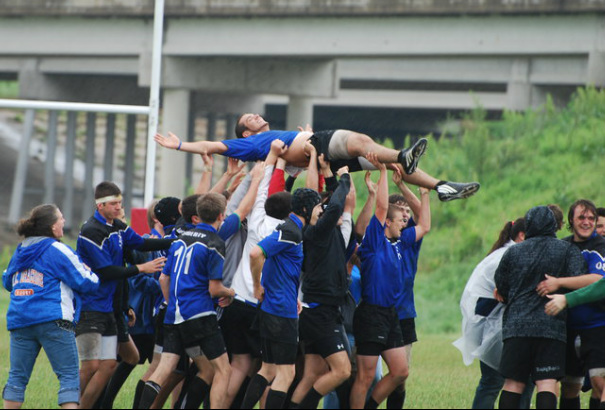 In 2010, following the tie breaker with the Jr. Blues Rugby Club, Matt Helin was held up by his teammates after kicking the kick that put the Jays into the 2010 State Final.   Photo by unknown

Timeline of Rugby Growth of Programs in Our Rugby Family